One of the most historic photos of all time, showing astronaut Buzz Aldrin walking on the moon in 1969, sold for just $7,703 at an auction in Denmark.

Buzz Aldrin’s famous photo was up for auction along with 74 more original photographs from NASA’s Apollo 8-17 missions. The photo of Aldrin was taken by astronaut Neil Armstrong shortly after the first manned landing on the Moon, in 1969. Armstrong even appears in the reflection of Aldrin’s helmet visor.

The photo became a symbol of the successful and historic voyage of Apollo 11 after National Geographic and Life magazines ran the image on their covers. See the iconic photo below:

The low sales value of the historic image drew a lot of attention. Buzz Aldrin’s photo sold for just $7,703. Because it is an original and extremely rare photo, the buyer really got a great deal and it can be said that he won the “gift” image at the absolute bargain.

However, it wasn’t just Buzz Aldrin’s photo that was undervalued. The collection of all 74 photographs were sold for just $171,831. For example, the first color photograph of Earthrise ever witnessed by humans taken during the Apollo 8 mission in 1968 sold for $13,095. See the image below:

The auction house said the seller was a foreigner with ties to Denmark, but did not reveal the identity of the seller or the buyers. Initially, the photographs were valued between $192,570 and $269,598.

Did you like this article? So, share it on social media (Facebook, Twitter, WhatsApp, Instagram, TikTok, and Telegram) and help us keep bringing new quality content here on the iPhoto Channel. We do not charge a subscription and our only source of income to pay journalists, web designers and server costs is through Google Adsense ads that are published throughout the text. So if you can share, we really appreciate it. 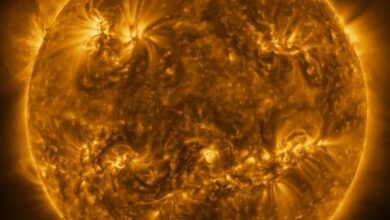